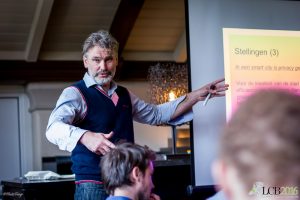 View of the future: introduction and discussion with the Ministry of Education, Culture and Science (OCW) on the digital transformation (2018);
Follow the Trend: seminar on Digital Transformation for the municipality of Middelburg (2018);
Smart Cities. Introduction to the Data-driven Policy workshop of  Berenschot Consultancy for the A + O Municipalities Foundation (Utrecht, 2017);
Standards and rules for the smart city. Introduction together with the municipality of Eindhoven at the Smart Cities 2.0 congress of AG Connect and the National Board (Zeist, 2017);
Opportunities for municipalities in a digitizing world. Seminar with managers, managers and policy makers from municipalities from the province of Groningen (at the request of Berenschot Consultancy) (Groningen, 2017);
The Data Revolution and Digital Transformation. College for Master of Public Information Management program of PBLQ / Erasmus (The Hague, 2017);
Digital Customer Travel from the Government: Quo Vadis? Introduction and moderation seminar (PEGA Systems, Amsterdam, 2017);
Smart Cities and the role of the municipal organization advisor. NOA meeting. (Amersfoort, 2017);
Modern ways of interaction with citizens: international workshop (EIPA, Barcelona, ​​2017);
Smart Cities and police: The operational center of the future (DITSS, Eindhoven, 2017);
Digital transformation: not because it is possible, but because it has to be done. Introduction for the RDW (Zwolle, 2017);
What are the consequences of Digital Transformation for the Tax Administration? Introduction for Jong Belastingdienst (Apeldoorn, 2016);
If the Google Car can do without a steering wheel, why do not you still need one? TEDX-like contribution in honor of the inaugural lecture of prof.dr. A. Meijer at Utrecht University (Utrecht, 2016);
Data and the City: What does the data society look like and what does this mean for cities and their boards? Introduction for 10 medium-sized municipalities, at the request of the A & O fund (Utrecht, 2016);
Smart City: Introduction and discussion about the Smart City and the consequences for information management for a group of 30 municipalities of the province of Noord-Brabant (at the request of KPN) (Eindhoven, 2016);
The future of information management. Lectures within the masterclasses PBLQ Verbinders (2016, 2017);
The data society: Workshop with experts from the National Archives, organized by PBLQ (The Hague, 2015);
Smart Cities: hype or hope? Introduction and debate during the Festival of Public Administration. Organized by PBLQ (Utrecht, 2015);
Smart Cities: food for thought Key-note and day presidency for the Smart City seminar of the Geography Faculty of Utrecht University (2016);
Digitalization versus datafication Academic introduction during the conference of the European Group for Public Administration (EGPA (Utrecht, 2016);
Smart Cities. Introduction and workshop (together with Prof. M. Thaens of PBLQ) during the National Conference of Public Administration (Delft, 2016);
Smart Cities: Interoperability and standards. Introduction about the usefulness and necessity of open standards at Smart Cities, at the request of Standardization Forum (Eindhoven, 2016).